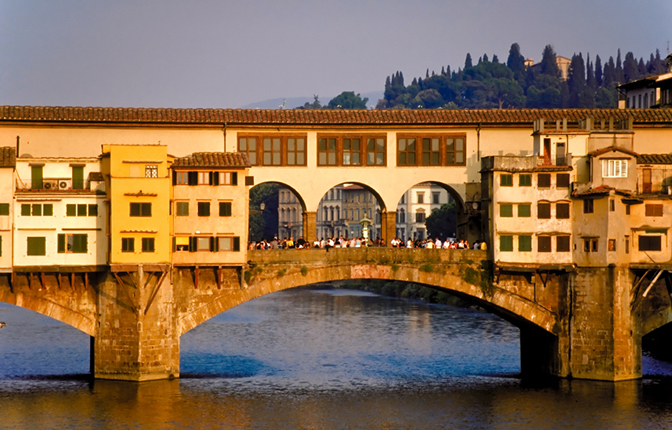 The statement is taken from a book that contains the predictions of a French scientific committee and it’s serious.

Baby boomers will not live on bridges, but their children might. At least according to the book Les 50 innovations qui vont bouleverser notre vie d’ici 2050 (The 50 innovations that will change our life by 2050).

It won’t be the first time in history. Building on bridges was common practice in the Middle Ages and the Renaissance. Take the Rialto Bridge in Venice and the Ponte Vecchio in Florence. But they are small bridges, or giant walkways, depending on how you look at it.

The book alludes to enormous bridges. For example, the author evokes an apocalyptic scenario: San Francisco in the year 2044. An earthquake measuring 8.6 on the Richter scale kills 18,000 people. The famous Golden Gate bridge holds up, but the cracks are too big. It has to be dismantled to build a new bridge.

To absorb the millions of human beings that will be added to the 9 billion inhabitants of Earth, with three-quarters living in mega cities, the American government decides to take advantage of bridges.

The biggest construction project in history starts. Hotels, deluxe residences and thousands of apartments are built under the bridge. The new bridge becomes an immense architectural complex where people work, consume and sleep.

This revolution is led by a new material: the concrete skin. Extremely light and so thin in some places (30 millimetres) that it filters light, the new concrete repairs its own cracks thanks to the micro-bacteria it contains. The rest is made up of steel, glass and transparent towers.

The bridge only has two lanes rather than six because of the reduction in road traffic which is reduced to a minimum. An important detail: pedestrians move on treadmills. Other mega cities adopt the concept: New York, Shanghai, Moscow, and Tokyo.

Why live on bridges when there is so much space on the planet? Let’s advance two hypotheses.

We are at the dawn of a revolution in the medical field. Repairing tissue cells greatly extends human life. Do you think we live to be very old? You haven’t seen anything.

Careful! Old people will be in very good health since they will have new cells. Consequence: earth’s population will explode.

Naturally, there will be a lot of land in the country regardless of where you are on the planet. However, people will not want to live in the country. At least not on a day-to-day basis. In Quebec, well-kept properties sell for $35,000. What a bargain. Why are they so inexpensive? Because nobody wants them.

In Egypt, demographers are unable to accurately pinpoint the population of Cairo, the country’s capital. Too many people, too many arrivals, too much movement. Unofficially, the city exceeds 20 million inhabitants.

Despite the unemployment and rampant misery, farmers are leaving the country to live in Cairo. The same thing is happening in Sao Paulo, Djakarta and other mega cities.

Will people live on the Champlain Bridge? It’s said that the upcoming repair work will extend its life by 50 years. What happens after that?

Éric de Riedmatten’s book is a treat. You go from surprise to surprise in health, transportation, communication, daily life. It’s incredible how the world is going to change! Another prediction: the construction of buildings along rivers.