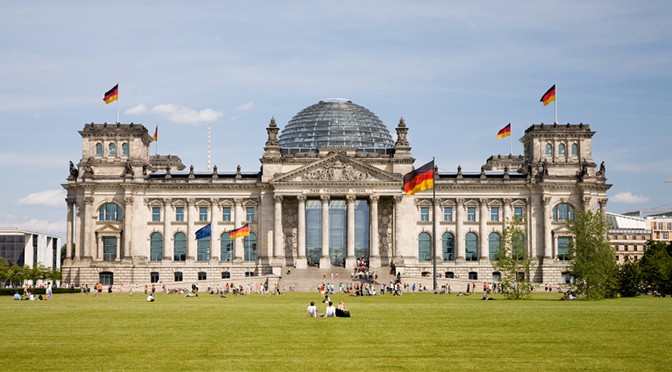 Germany impressed the whole world with its World Cup performance. A historical 7-1 victory against Brazil and the final victory against Argentina. The Germans were showered with accolades. What a team. They’re patient and methodical. No flash, but efficient playing. Therein lies the genius of the German culture: the practical and efficient before the esthetic.

But the Germans’ greatest victory remains the reunification of the two Germanys after the Wall fell in 1989. Two diametrically opposed ways of thinking had to be merged: the capitalist mode and the communist mode. A colossal undertaking that is coming to a painful end. Many people believe that only Germans could overcome such an obstacle thanks to their cult of efficiency.

One building symbolizes this legendary exploit: the Reichstag with its famous glass dome.

Built in 1894, the Reichstag was not an esthetic success. The emperor at the time even called it a monkey cage. In 1933, the Reichstag was the victim of arson. In the name of order, Hitler took advantage of the event to impose his dictatorship.

Busy preparing for war, the Nazis abandoned the building. Allied bombings in Berlin in 1945 caused further damage. The glass dome at the time was destroyed.

Erected in 1961, the wall was built just one foot from the building. It would remain that way for 28 years. In the meantime, West Germans partially renovated the Reichstag to make it a simple office building.

November 1989, the wall falls. What happens now? Would the Reichstag become the seat of government again? Should the old dome be rebuilt? The debate raged. In June 1995, the artist Christo succeeded in convincing the authorities to wrap the Reichstag in a big rope bag evoking the legendary Pierrot’s white costume. The Reichstag was wrapped for two weeks. The goal: symbolize the reunification of the two Germanys.

Pitiful in the eyes of many, the artist led Germans to a consensus: they had to do away with the old Reichstag once and for all and implement a permanent symbol of the reunification.

A contest was held. The government at the time retained the proposal of British architect Norman Foster: construction of a gigantic glass dome that provides a 360 degree view of Berlin. Two steel spiralling ramps bring visitors to the top, 23 metres above the platform.

Thanks to the immense glass cone that focuses the light of day in the centre of the dome, visitors see German members of parliament debating in the new parliament ten metres below, with the reconstruction of the Reichstag’s interior allowing for the return of the seat of government. Do you feel the obsessive transparency expressed countless times by the politicians?

According to the official version, overlaying the ramps is designed to show the German people and tourists that the people are above the members of parliament, who are subject to the will of the people, unlike the Nazi or communist years.

The complex demonstrates once again the dynamics and esthetics of blending an old building with a contemporary one, in this case, the neo-classical style palace with the glass dome. The contrast of old and new works its magic again.

The general consensus is that it is successful, since Berliners show their pride in their dome and millions of tourists sing its praises.