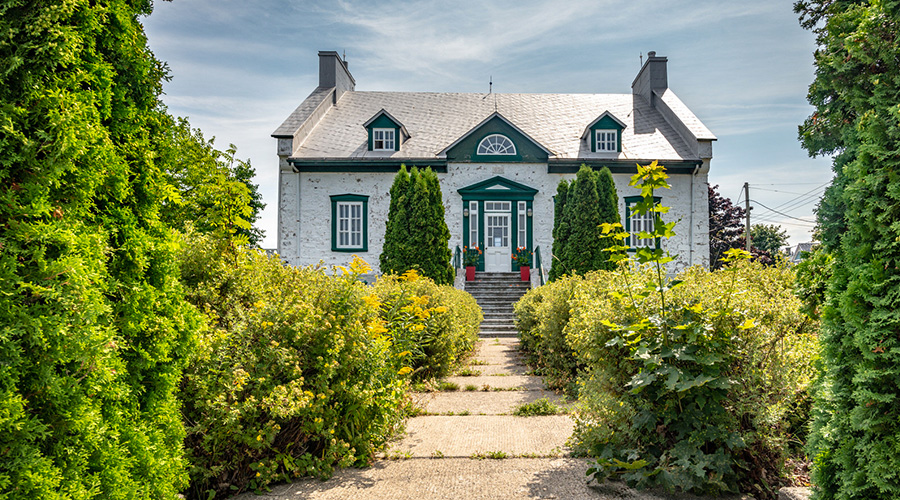 Do you have a passion for history and architecture? You probably love visiting old buildings. You’re in luck! Our province is full of longstanding real estate gems.

And it goes far beyond architecture! Because of their location, their appearance and their history, some residences can allow you to discover fascinating aspects of the Quebec of yesteryear.

At the Forefront of Architecture

Located in Quebec City’s Lower Town, this house was built around 1690. It is characterized both by French architecture – beams clearly visible on the ceiling and cabinets inserted into the walls – and by its features that make it adapted to Canadian climate, such as small rooms, thick stone walls, a steeply slanting roof with two slopes and skylight windows.

These architectural features were not widespread until the following century: it can therefore be said that this home is a pioneer of its type!

In Verdun stands this historic jewel from 1710, which is positioned on the banks of the St. Lawrence River. Several hundreds of years old, the property is found on an even older Native American archaeological site: 5,000 years separate the two!

The house has classic features of a traditional Canadian home, such as a symmetrical construction and a roof with two pronounced slopes. Good news: You can visit this home since it is now a museum.

From Shop to Private House and Second Home

Built around 1670, this house was first used as a fur trading post before being converted into a private residence. Over the years, its vocation has changed: it has become a secondary home for various English-speaking families, then was classified as a Quebec Cultural Heritage site.

It is located on the shores of Lake Saint-Louis, at the head of the Lachine Rapids.

For A Wealthy Businessman

In 1670, the construction of a vast prestigious residence began in Quebec City on the banks of the Saint-Laurent River. Its double mansard roof is remarkable since it is covered with slate, a rare material that had to be imported at the time.

In the past, the house was also used as a warehouse for its rich owner. After being taken over by different businesses for many years, the building has now regained its original residential vocation thanks to a property management group.

On île d’Orléans, this ancestral home from 1730 has recently been renovated to regain its yesteryear charm. The house was inhabited until 1984. Surprisingly, only two families have been lucky enough to inhabit it since its construction two centuries earlier; the Canac and the Drouin families (upon several generations, of course!).

It stands out due to its authenticity and restoration that has allowed it to keep its original charm. It can now be visited as a museum.

Why not take a trip to these old houses during your next vacation?