The desire to dominate is often reflected in real estate. Think of cathedrals, basilicas, churches built high above valleys, huge castles, the manors of British lords and the luxurious properties of the rich and famous.

Adolf Hitler was certainly not immune to the desire to dominate. We know that painting was one of the German dictator’s passions, but it’s through architecture that he best expressed his need for domination, power and absolute liberty—the very essence of fascism.

Apart from his many headquarters, Hitler built three buildings in Bavaria, on the slopes of the Alps close to the Austrian border, near the city of Salzburg. First there was the Berghof, his second home and favourite refuge, where he entertained foreign dignitaries. Hitler designed the plans himself. Built on the side of a mountain, the home overlooked a scenic valley.

In front of the Berghof was a teahouse, the second of his three buildings. Every afternoon, Hitler took his daily walk and headed to this small structure, where it’s said he liked to relax alone, with friends or with his companion, Eva Braun. Perhaps some of the dictator’s political decisions were made during his daily walks there.

The most spectacular of the three buildings is the Kehlsteinhaus, a cottage designed to serve as a Nazi conference centre. A French diplomat visiting Hitler before World War II was so impressed by the building’s setting that he called it the Eagle’s Nest. The building is located on the side of the Hoher Göll (2500 metres), at the top of a mountain called Kehlstein, whose height is 1,834 metres. When you look at the photo, you feel a slight shiver because you sense that the building conveys Hitler’s ultimate goal: to dominate the world by crushing it under his boots.[……]

It’s astonishing! There are things difficult to describe with words. What do you think about this ceiling? 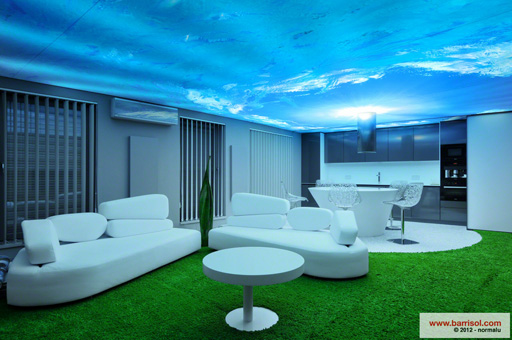 When you think about basement ceilings, you usually visualize a suspended ceiling. Practical and ingenious, the suspended ceiling gives you access to pipes and electrical wires. For the esthetics however, forget it.

So what are the alternatives? The possibilities are endless. There are tiles that can be transformed according to current styles, with colours, inlays and suspended objects. Shiny copper tiles and fabric tiles with varied shapes and colours caught our attention.[……]