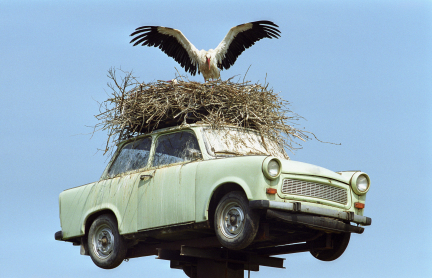 No, not a Trabant, the odd East German car affectionately dubbed the Trabi, but an enormous stork nest!

In Europe, three species of storks prefer to make nests on rooftops rather than in trees according to Wikipedia.

In the GeoGuide de la Croatie, you discover that there’s even a European stork capital in the Lonjsko Polje National Park, in the small village of Cigoc. How many years do you think a stork nest can remain attached to a roof? 1, 5, 10, 25, 50, perhaps 100 years?

If you guessed 50, you’re right. That’s half a century!

Imagine that on your roof! The structure of the house better be solid if you don’t want to have storks landing in your living room like Santa Claus.[……] 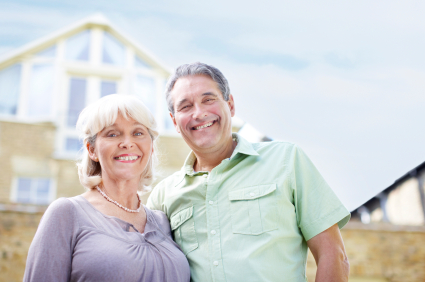 For many people, a house seems like a miraculous investment: Owning a home solves most financial problems and is the ultimate pension plan.

It’s an undeniable fact that a house is a long-term and effective investment. Most property owners and experts agree on this. But placing all your bets on a house is a huge risk.

Patrick Charlebois, investment advisor and manager at Bank National Financial in Trois-Rivières, cautions his clients. He definitely recommends purchasing a home and lists the advantages: good financial investment, better quality of life and a valuable asset for retirement.

Becoming an owner helps you to obtain a good credit file, to develop discipline for the family budget and to acquire the habit of saving money. But property owners may commit an error by placing all their hopes on their property.[……]

Halloween is behind you. You stored the scary decorations and are planning your happy holiday selection.

Now it’s time to choose the decorating style that you’d like to install outside your home—whether you live in a house, a rental, an apartment, a condo or a cottage. All homes look good illuminated with Christmas lights.

Most people like to use strands of lights because they’re easy to put up. It’s useful to know that according to Statistics Canada, LED bulbs are 90% more energy efficient than incandescent bulbs. What’s more, light emitting diode lights reduce the risk of fire, are more resistant and last up to ten times longer.

For three years now journalists and economists have been warning us: “Watch out, interest rates are going to go up!” And then the rates stay down. Because they keep crying wolf, we don’t listen anymore—and that’s where the danger lies. One fine day, the rates are going to start rising and for some of us, it’ll be too late.

That’s the message from the Financial Consumer Agency of Canada (FCAC).

“While interest rates are now at all-time lows in Canada, it is likely that they will rise sometime in the future. Canadians need to look at how much debt they are carrying, particularly in the amount of their mortgages, home equity lines of credit, personal lines of credit and variable-rate personal loans,” says FCAC Commissioner Ursula Menke. “By doing a debt check-up, consumers can take a close look at their present debt burden and think about whether they would be able to handle it if their payments increase.”[……]

Will it open or not? And if it opens, will we see a ray of light rising to the sky? Unless of course it takes the opposite route, from the heavens to the interior of the building.

Light or not, you feel like something’s about to happen, that the building’s alive, that you’re going to make contact. No, it’s not a spaceship; it’s infinitely more poetic.

We are at the Lotus Temple in New Delhi, the capital of India. The temple belongs to the Baha’i community and its real name is the Baha’i House of Worship.[……]

Planning the steps to renovate a kitchen is an excellent strategy to prevent your experience from turning into a nightmare.

Deciding on the amount to invest is the very first step. It enables you to determine the scale of the project.

From the very beginning, one question must be asked: Do you start from scratch or not? Do you get rid of absolutely everything or not?

The right professional help is always advised. Do you know what kitchen designers can do for you? 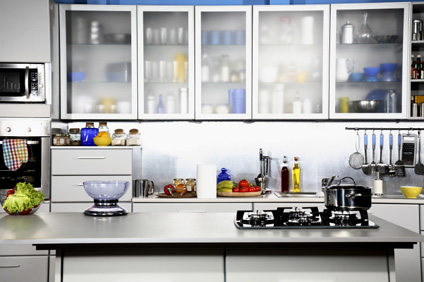 On my way to work, I observe the houses I pass by. I try to guess the owner’s personality from the outside appearance of the home. It’s a game I play. Most houses don’t give off anything in particular. Some of them though, arouse my curiosity.

One rundown house suggests great sadness. It’s lived in because there are always cars in the driveway. Then there’s a house that’s absolutely impeccable, but cold as ice; it doesn’t exactly invite you to ring the bell.

At one time or another all of us have entered a house that we wanted to leave as fast as our feet could carry us, for all kinds of reasons: the decor, the atmosphere, the owner or maybe something in the very air. Human beings project themselves and are reflected in the decor, the arrangement of furniture, the division of rooms, etc.[……]