Calling them skyscrapers would be a bit pretentious. They are just 72 metres or 18 storeys high. They do not have a revolutionary design and they are not breathtaking. So why are they so intriguing? Because they are musketeers in their soul. “It’s all for one and one for all.” These buildings come in a package of five or they don’t come at all. And there have curtains too.

The official name of this real estate complex is Hötorgsskraporna, which translates into scrapers or Höterget Buildings, but the people of Stockholm affectionately call them the five trumpet blasts.

Driven by renewal at the time, the authorities replaced an entire neighbourhood, destroying historical buildings and replacing them with modern ones. The idea to create “brother” buildings surged within the team. They just had to decide on the number.

Four was proposed. An indignant architect: “One offers a lady five roses, not four.” It was a powerful argument, since they finally settled on five.

When the Swedish architects presented the project to the municipal administration, the mayor’s assistant was carried away by emotion. “For me, this urban project evokes the creative power of Man and his belief in the future, five major chords, five trumpet blasts in a Handel score,” he said. Handel is a composer known for his use of brass instruments.

The five buildings were erected one after another between 1952 and 1966. Look closely at the façades of each building. They may seem like nothing to you, but this type of façade was not very widespread at the time. Each one is a curtain wall.[……]

Dressing a window is an overlooked art. Yet, from a white, almost gossamer-like veil to an opaque velvet fabric, curtains contribute greatly to the look of a room.

For the choice of colour, the strong points are the same between the curtain and the room to decorate: contrasting, harmonic or complementary.

A pale and discreet curtain highlights the colour of a wall or another surface that you want to emphasize, such as an artistic wall. This same curtain would overshadow the flashy look of a room that needs to stand out from rest.

However, a dark curtain will add character to a pale, monochrome room. For example, brown has a tonic effect on a deluge of white or cream.[……]

Turquoise has very few takers in decoration. Yes, we are delighted by the turquoise waters of the Pacific islands, we contemplate the turquoise of the sky, we sigh in envy when we see a turquoise pearl, our eyes widen in front of turquoise satin sheets.

So where does this reluctance come from?[……]

Have you ever thought about it or are you like most people and you automatically install doors everywhere? There are several advantages to putting up curtains rather than doors. 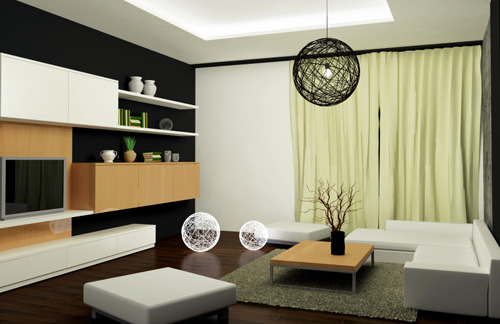 Look at this photo showing a wall of French folds curtains. Is it a window, a door or a storage space? Maybe, like Alice in Wonderland, asking what’s behind the curtain adds a touch of intrigue to the decor.

Obviously you just don’t remove any door and replace it with a curtain! Closet doors are perfect. Folding closet doors limit access to the storage space. Sometimes you have to contort yourself into weird positions to get to something at the back of your closet. Folding doors also eat up the available space in your room. It’s worse with full-sized doors.[……]

A lot of people think that they will reduce heating costs and be more comfortable by sealing their windows with plastic for the winter. They don’t open their windows until spring. Is that the right solution?[……]