This futuristic ensemble is the parliament of Brazil. The right-side up saucer contains the Senate, while the upside down saucer is the seat of the Chamber of Deputies. The two skyscrapers house the offices of bureaucrats, senators and deputies. 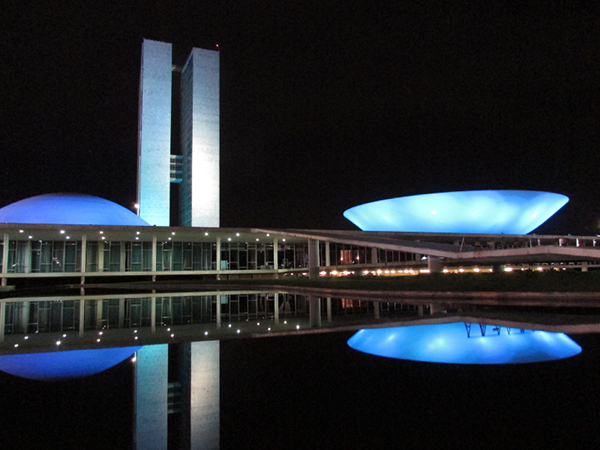 If it’s true that ingenuity lies in simplicity, we should prostrate before Brazilian architect Oscar Niemeyer. His parliament building, called the Brazilian National Congress, is simple, elegant and efficient.

It is under these domes that deputies and senators discuss the forthcoming World Cup of Soccer and the Rio Olympic Games.

Obviously it doesn’t make sense for senators and deputies to debate in such hermetic buildings. Actually they don’t; the two domes are symbols more than anything else. The two parliamentary assemblies are partially underground. The dome that opens to the sky symbolizes the deputies’ openness to the people, while the upside down dome symbolizes reflection.

Loyal to its philosophy, the Guide du Routard takes pride in providing the people’s point of view for which “the overturned bowl evokes comfortable senators, while its alter ego symbolizes deputies who are demanding to eat.”[……]